Glistening cobalt blue above and tawny below, barn swallows dart gracefully over fields, barnyards, and open water in search of flying insect prey. Look for the long, deeply forked tail that streams out behind this agile flyer and sets it apart from all other North American swallows. Barn Swallows often cruise low, flying just a few inches above the ground or water. It seems to have adopted humans as neighbors, typically placing its cup-shaped mud nest in barns or garages, or under bridges or wharves; indeed, it is now rare to find a Barn Swallow nest in a site that is not manmade.

For the most part swallows are insectivorous, taking flying insects on the wing. They also avoid certain prey types; in particular stinging insects such as bees and wasps are generally avoided. In addition to insect prey a number of species will occasionally consume fruits and other plant matter.

Swallows have adapted to hunting insects on the wing by developing a slender, streamlined body and long pointed wings, which allow great maneuverability and endurance, as well as frequent periods of gliding. Their body shape allows for very efficient flight; the metabolic rate of swallows in flight is 49–72% lower than equivalent passerines of the same size.

The Barn Swallow is the most abundant and widely distributed swallow species in the world. It breeds throughout the Northern Hemisphere and winters in much of the Southern Hemisphere.

Swallows are tolerated by humans because of their beneficial role as insect-eaters, and some species have readily adapted to nesting in and around human habitation. The barn swallow and house martin now rarely use natural sites. A related species in the same passerine family, the purple martin, is also actively encouraged by people to nest around humans and elaborate nest boxes are erected.

According to a sailing superstition, swallows are a good omen to those at sea. This probably arose from the fact that swallows are land-based birds, so their appearance informs a sailor that he is close to shore.  An old term of venery for swallows is a “flight” or “sweep”.

According to another legend, the barn swallow got its forked tail because it stole fire from the gods to bring to people. An angry deity hurled a firebrand at the swallow, singeing away its middle tail feathers. 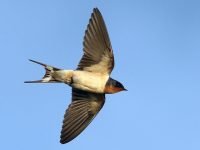 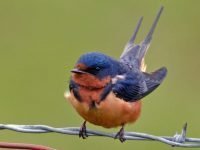 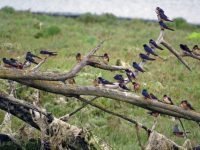 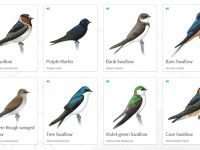