This is a native American bird with an interesting history. It earned its name from its habit of sitting on a cow’s back, catching and eating insects. In times past, the  cowbird would move with the bison, out west along great areas, making it impossible to settle down and raise a family. Their survival strategy was to lay their eggs in nests built by other birds. They have been known to take out an egg and replace it with one of their own! This is called a brood parasite, as they rely upon others to raise their young. The cowbird is larger than its nest mates and will usually get more than its fair share of food from the parents. They thrive, often at the expense of the other chicks.

See the footage below of the Phoebe parents feeding the large and demanding cowbird chick a variety of insects, while their own babies get none. The cowbird is protected under the Native Migratory Bird act, which is but one reason not to interfere with nature.

Please read this article to find out why it’s not ok to to remove cowbird eggs.

They are found in a wide variety of settings. They are common to grasslands.

They have been known to lay eggs in as many as 220 other kinds of birds’ nests! The females can lay up to 36 eggs in a breeding season. They have adapted to hatch sooner and grow faster than most other birds, so they have a built-in advantage to survive.

Human development has actually helped this bird to prosper.

Why to not remove a cowbird egg!

This can result in retribution by cowbird parents. A 2007 study, led by avian ecologist Jeffrey Hoover with the Illinois Natural History Survey, was the first to document what’s known as “mafia behavior.” In the experiment, scientists observed the effects of removing Brown-headed Cowbird eggs from parasitized warbler nests. In 56 percent of cases, cowbird mothers returned and ransacked the nest, destroying most or all eggs. Comparatively, six percent of nests were destroyed when humans didn’t interfere. 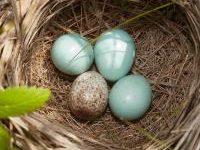