A buoyant, large-headed duck that abruptly vanishes and resurfaces as it feeds, the tiny bufflehead spends winters bobbing in bays, estuaries, reservoirs, and lakes. Males are striking black-and-white from a distance. A closer look at the head shows glossy green and purple setting off the striking white patch. Females are a subdued gray-brown with a neat white patch on the cheek. Bufflehead nest in old woodpecker holes, particularly those made by northern flickers and, on occasion, by pileated woodpeckers.

Bufflehead normally live only in North America, but in winter they occasionally show up elsewhere, including Japan, Greenland, Iceland, the British Isles, Belgium, France, Finland, and Czechoslovakia. In some of these cases, the birds may have escaped from captivity.

Bufflehead dive for aquatic invertebrates, crustaceans, and mollusks. They typically swallow their food while still underwater. Dives last on average about 12 seconds and rarely more than 25 seconds, typically staying on the surface another 12 seconds or so before diving again. On freshwater they mostly eat damselfly and dragonfly larvae, midge larvae, mayfly larvae, caddisfly larvae and snails and clams in winter. They eat some plant matter in fall and winter, mainly seeds of pondweeds and bulrushes.

Bufflehead swim buoyantly, dive easily, and take flight by running a short distance on the surface. They fly low over the water and higher over the land. To dive, Bufflehead compress their plumage to squeeze out air, then give a slight forward leap and plunge powerfully downward. They hold their wings tightly against their bodies underwater and use only their feet to propel themselves. At the end of a dive, they may bob to the surface like a cork. Throughout the day they alternate between bouts of feeding, swimming alertly, preening, and sleeping.

Bufflehead breed near ponds and lakes in boreal forest and aspen parkland of Canada and Alaska, with isolated populations in the western United States. The bufflehead’s breeding range is limited by the distribution of northern flickers, which are their main source of nesting cavities. Bufflehead are North America’s smallest diving duck; they benefit by using old flicker nests that larger ducks such as goldeneyes and mergansers cannot fit into. In winter they occur mainly near the coast (although they can be found in smaller numbers inland). They use shallow, sheltered coves, harbors, estuaries, or beaches, avoiding open coastlines. Inland, they use ponds, lakes, impoundments, or bays along slow-moving rivers.

The name “Bufflehead” is derived from “buffalo-head,” for the male’s odd puffy head shape.

Bufflehead fossils from the late Pleistocene (about 500,000 years ago) have been found in Alaska, California, Florida, Illinois, Kansas, Texas, and Washington. One California fossil that resembles a modern bufflehead dates to the late Pliocene, two million years ago.

Bufflehead swim buoyantly, dive easily, and take flight by running a short distance on the surface. They fly low over the water and higher over the land. To dive, Bufflehead compress their plumage to squeeze out air, then give a slight forward leap and plunge powerfully downward. They hold their wings tightly against their bodies underwater and use only their feet to propel themselves. At the end of a dive, they may bob to the surface like a cork. Throughout the day they alternate between bouts of feeding, swimming alertly, preening, and sleeping.

They are seen in twos or in small groups and unlike most ducks, are monogamous. During mating season, you may notice a great deal of bufflehead kerfuffling taking place. The male’s courtship displays are wonderfully exuberant, with much head pumping, chest thrusting, and aggressive flying. The male goes so far as to exaggerate the size of his head by puffing out his bushy crest. Occasionally, the males chase females, but most of the chasing is directed towards other males in territorial displays, which are accomplished by both flying and skidding across the water as well as via underwater chasing. 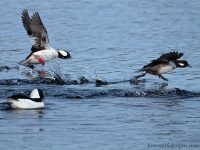 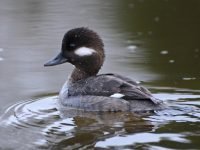 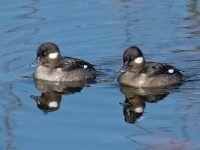 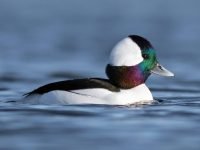