This majestic hawk is very common locally. It is distinguished by its blocky, heavy body, white feathers under its wings,  and rufus (reddish) tail.

The Native American tribes regarded them as a sacred bird and used their feathers in rituals.

The female is 25% larger than the male, which is common among birds of prey. No one is quite sure why the hawk has evolved this way, but there are many hypotheses. One is that the female will then be better equipped to defend her young against predators. Another is that their larger size protects them from males that have sharp talons and beaks. As these birds hunt live prey, they have an aggressive nature. A smaller size male might be a safer choice for a female. Over time, the theory goes, males became smaller through this selective breeding process.

Listen to its distinctive shriek by pressing on the button below and you will recognize this sound as one used commonly on TV and in movies!

They can reach 3 pounds

The hawk feasts on small animals, birds, reptiles and even fish! They are also known to hunt as a pair.

When not making lazy circles on the sky, you will see hawks along roadsides, perched on power lines, fences and trees. They use these as look-out points for prey.

They begin to breed at the age of three and mate for life. Their nests are high up in trees or along cliffs. The female lays 1-5 eggs in April. The male helps to feed the young. They might continue to use the same nest over years, adding materials to keep it clean! This long-lived raptor is known to live past the age of 30.

These birds live in Lewisboro year-round.

The hawk plays an important role in controlling the populations of small mammals like rodents and rabbits.

These birds have been used in the sport of falconry.

The hawk makes use of thermal updrafts to fly high in the sky with little effort.

Teatown Reservation has a small exhibit which features large local birds that have been injured and must be kept in captivity.

There are several species of hawk that you might see here in Westchester. This interesting page will help you to see the differences between them! 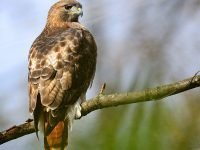 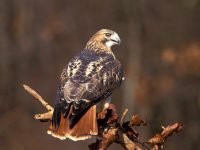 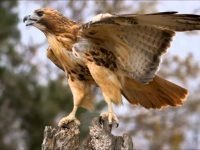