There are thousands of different types of dragonflies and they are on every continent except for Antarctica.  The state of New York is home to about 120 different species. We have many skimmers here in Lewisboro, which are the ones most commonly seen around ponds and marshes.

The dragonfly is easily identified by the four long wings which are often iridescent in flight.  Their bodies are slender. Look for them hovering over still bodies of water, hunting for insects using their keen eyesight and acrobatic flying skills.

The dragonfly is an important predator, as it is nature’s way of controlling the mosquito population. They can eat hundreds a day, which has earned them the name mosquito hawk.

Watch the video below to learn more.

They do not sting! They might bite you if you handle them carelessly.

They are carnivorous and hunt insects, like mosquitoes, mayflies, moths, etc.

The life of insects is often deceptively complex, and the dragonfly is no exception. Males are territorial, vying to stake out the most desirable areas for food and breeding. Once a female enters his territory, he pursues her and holds her in a clasp. The scientific expression used is “in cop”. The male will fly in tandem with the female to be sure that no other male attempts to breed with her. If one succeeds, he will not only insert his sperm but actively dig out and remove the sperm placed be the previous male! Eggs are laid on the water or on vegetation on the water, interdependent on the species of dragonfly.

Occasionally, the female will play dead to avoid mating with a male. Or she will even take on physical characteristics resembling a male to avoid being  “interfered” with!

Watch the video to learn more about the dragonfly in the nymph stage.

The dragonfly not only eats, but is also eaten. Birds are the most common predators of the dragonfly.

The dragonfly acts as a natural pest control. Loss of habitat worldwide has lead to the disappearance and extirpation of dragonfly species. Some countries are actively attempting to reverse this trend, as crops are being overtaken by pests that had previously been controlled by dragonflies.

Dragonflies are powerful and agile fliers, capable of migrating across the sea, moving in any direction, and changing direction suddenly. In flight, the adult dragonfly can propel itself in six directions: upward, downward, forward, backward, to left and to right. In general, large dragonflies like the hawkers have a maximum speed of 22–34 mph, with average cruising speed of about 9.9 mph. 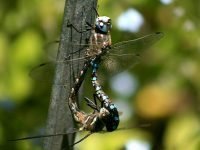 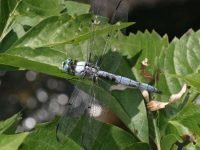 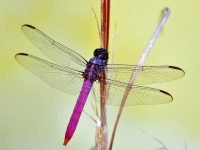 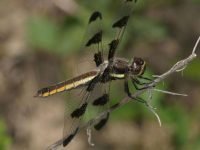