Tens of millions of ash trees in this country have been killed SO FAR and it is possible that most of the 8.7 billion ash trees in North American will succumb eventually the ash borer.

This wood-boring beetle was accidentally introduced to the U.S. from Central China and was first identified here in 2002. It is suspected that they hitched a ride in packing crates.

Here is good example of how flora and fauna, once outside their native range, can wreak havoc on another ecosystem.

The beetle larvae tunnels through the tissue of the tree in “S” shaped galleries girdling the tree which prevents the flow of nutrients.

Our trees have no immunity to this insect.

Trees are often killed in about four years, although it can take as little as two years. When trees are first attacked by EAB, the symptoms are hard to notice. 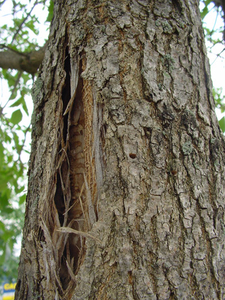 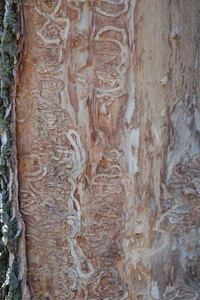 Emerald ash borers generally have a one-year life cycle that can extend to two years in a vigorously growing tree.

Ironically, the ash was widely planted once our native elm trees were decimated by Dutch Elm disease!

The lesson learned is that it is always best to plant a diversity of native plants. This cuts down on the transmission of pests and disease. It is one reason why the elm tree still exists in Central Park in NYC. They were isolated from greater populations!

There are many resources where you can learn more. In New York, the DEC has issued this article.