Did you know that the nine-spotted lady bug is New York State’s official insect? These brightly colored small beetles are a favorite of many. The scientific name for this group of bugs, coccinellids, comes from the Latin word for scarlet. Unfortunately, this nine-spotted ladybug species is quite rare as it has been overtaken by the Asian beetles which were introduced in New York back in the 1940s. These are very similar looking but with a different number of spots or other markings. All these beetles are good for pest control and the ladybug is known for its prodigious aphid eating abilities.

Indeed, a ladybug can eat up to 5,000 insects in its lifetime.

Many of Us Grew Up Hearing this Rhyme

Ladybug! Ladybug!
Fly away home.
Your house is on fire.
And your children all gone.

Its origins are unclear and there is much speculation with no real answer. One theory is that it might have been a warning in code to Catholics practicing their faith back at the time it was illegal in England. As we have seen, the Virgin Mary was linked by name to the “lady” bug. We will never know for sure.

Watch the video to the left!

Birds, frogs, wasps, spiders and others will eat the ladybug.

The origins of the name ladybug are quite interesting. It seemed to have captured the imagination of many.

Long ago in England, the scarlet red shell of this beetle reminded some of the Blessed Mother Mary’s red cloak. The seven spots of the bug were interpreted to represent the seven sorrows and the seven joys of Our Lady. So, in England, this beetle came to be known as Our Lady’s Bird or a  Ladybeetle. This concept transcended culture as the German word for lady bug translates to Marybeetle in English. In the U.S., the name evolved to a more secular “ladybug”.

Yes, the red in your red velvet cupcake comes from the dehydrated and crushed shells of an insect ! The name coccinelledae might sound a lot like cochineal, which is another red insect. Their shells are dried out, and processed into carmine dyes. Carmine is used as a red in cosmetics, and food.  It is safe and probably preferable to other red dyes. So unless you are a vegan or kosher, no worries. Read more here. 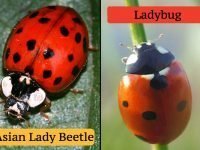