The white-tailed deer has become more and more common to our  area over the last fifty years. Residential development has created an ideal habitat to support the increase in population.  Until recently, there were no predators that threatened the deer. Today, the coyote will take young fawns in the spring, as well as injured, full-size deer.

Only the male has antlers, which first appear at the age of     1 1/2. They begin to grow in the spring and are covered in short hairs that have the appearance of velvet. From late December into early spring, the buck will naturally shed his antlers. Each year, they get larger, so you can tell the age of the buck by the size of his antlers! By the age of six, the size (number of “points”) will peak.

Deer are the most popular game animal in New York state. In Westchester County, it is legal to hunt deer by bow from October 1 through January 31. This period of time coincides with the mating season, known as the “rut”. It is important to take extra care driving on roads, as the shortened daylight hours, combined with a more active deer population, increases the chances of auto accidents.

What You Can Do to Help

Rather than building an expensive metal fence that forces deer onto your neighbors’ property and blocks other animals from traveling, wrap individual bushes in deer netting during the winter, when deer are most likely to damage them. The base of young trees can be wrapped in the fall with burlap or chicken wire to prevent deer from rubbing the bark off of them.

Herbivorous. They can eat fruits and flowers as well as grass, twigs and lichens.  Deer are mostly nocturnal.

They are very adaptable to a variety of habitats.

The female goes into estrus (heat) in the fall, which is triggered by the shorter daylight hours. One to three fawns are born in the spring. The mother leaves the young during the day and returns on a regular basis to nurse them, which is why you might often see spotted fawns alone. This is totally normal and should not cause alarm. They have not been abandoned. By the time they are a month old, they can go with their mothers to graze during the day. Fawns stay with their mothers for a year (males) or two (females).

The deer has had a disastrous impact on the ecosystem of our forests and woodlands edges. Native plants and shrubs which provide food and shelter to other species have been browsed (eaten) to the ground and can no longer grow and thrive.  At the same time, the invasive species, barberry, (also known as the pricker bush) has taken over.

On the other hand, the deer is a food source for the coyote and bobcat, both of which seem to be more common than in the past.

The deer, especially the buck, has a system of marking his territory and communicating with other deer. He rubs his antlers against the bark of trees.

They stomp their feet if they sense danger. 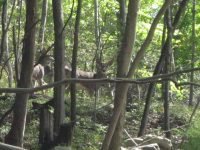 a group of bucks hanging out in Waccabuc, photo by Linda Broudy 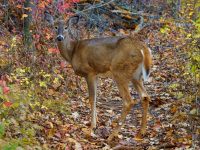 More on Mammals in Lewisboro