This snake got its name as it was often found around barns, as this is where they find the prey that is the mainstay of their diet. It is an old wives tale that they drink the milk of cows but the common name stuck. Rather than killing their prey by venom, they are constrictors, meaning that they hold their potential kill with their teeth as they squeeze it. As a result, this snake is not poisonous. There is a rhyme that children in the south learn, to differentiate venomous snakes, such as the coral snake, from harmless ones that goes like this: “red touches black, venom lack (or friend of Jack), red touches yellow, can kill a fellow”.

Take a look at the photo gallery below to see the differences in coloration. Often they have a V or Y shape just behind their head. You might also note that they look slender for their length, in comparison to the copperhead. They range in length from 20 to 60 inches.

They are found in many settings, from fields to rocky hillsides. As mentioned, they are often found where they can find mice and other rodents, so they will frequent barns and other outbuildings.

Like many other animals, they will mate in spring. The female will lay her eggs in summer and the young will hatch in late summer or early fall. They can live up to 12 years in the wild.

They are great at keeping rodent populations at bay. 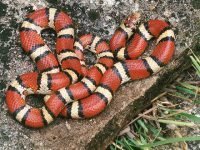 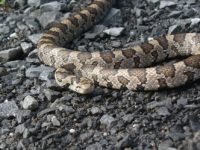 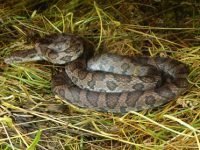 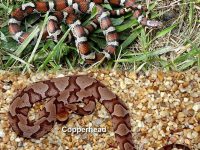 More on Reptiles and Amphibians in Lewisboro