The only beech tree native to the US, it can grow as high as 100 feet and live to be hundreds (300-400) of years old. It grows slowly, and can take up to 40 years to produce nuts and seeds. These are edible and sweet, most often enjoyed by wildlife such as squirrels, game-birds and bear.

This is a dense shade tree with a large root system that is close to the surface. It spreads through suckers, arising from the shallow roots, and in that way there are often large areas (“stands”) of beech trees that become established over the years. Unlike most trees, the beech is “shade tolerant” and able to grow under the shade beneath other trees.

This wood is valuable as it is very strong, and so it has many commercial uses. 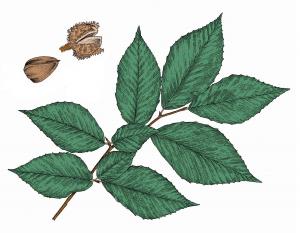 Leathery green. Turns yellow, brown or bronze in fall. They may linger on the branches in winter. It is thought that this may keep the beech’s thin, light-coloed bark from getting sunburned in the winter.

It produces a prickly husk containing two to three nuts.

What is a Mast Year?

A mast year is when nearly all of the trees of a species produce an exceptional abundance of fruits and nuts. The seed predators such as insects and squirrels can’t eat them all, so that a greater proportion of the nuts have a chance to survive, and eventually germinate and grow as saplings

Carve into the the beech tree. Its thin smooth bark tempts people to carve their initials in it. This can damage the health of the tree.

Is often found where soil is rich. It was said that settlers could tell that land would be good for farming if the beech was present.

It will be found in woodlands with other hardwood trees such as the sugar maple, yellow birch, black cherry and white oak. Since it can grow in shady conditions, it can begin its life as an understory tree.

Leathery green. Turns yellow, brown or bronze in fall. They may linger on the branches in winter. It is thought that this may keep the beech’s thin, light-coloed bark from getting sunburned in the winter.

It produces a prickly husk containing two to three nuts.

This is a valuable tree for wild life for the food that it provides. Even once it dies, its trunk is a habitat for birds, small mammals and insects. It is also the host plant for the Early Hairstreak butterfly.

This hardwood has many uses. Budweiser has advertised that its beer has been “beechwood aged”, in barrels made from this tree.

This majestic tree was a primary habitat for the extinct passenger pigeon. 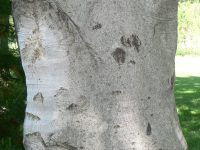 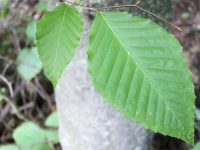 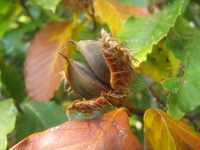