This is a native tree, quite common and rapid growing, reaching heights of 90 feet. Historically, it was a hardy tree with beautiful fall foliage and so became a widely planted street tree. Unfortunately, the Emerald Ash Borer (EAB) has been responsible for the deaths of at least 50 million trees, so far. By the time the damage is visible, it is too late to treat it. Ash wilts, another disease, is also killing ash trees in Lewisboro. It is thought that all of our ash trees will die from either of these diseases. Foresters are collecting ash seeds and storing them so that perhaps 100 years from now a new generation of ash trees can be planted after the two deadly organisms themselves have died out for to the lack of ash trees.

This tree sports what is known as a compound leaf. Each leaf is made up of 7 to 9 leaflets (always an odd number). They grow opposite each other. The branches also grow straight across from each other, just as maples and dogwoods do. 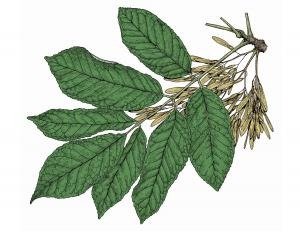 The leaves turn an attractive orange and red in the autumn.

The seeds ripen in September and fall off in early winter. They have small wings 1 to 2″ long, known as samaras.

Male and female flowers grow on different trees and appear in April and May.

There are two other kinds of ash found here. One is the black ash, the Fraxis nigra, which is likely to be found in swampy areas and has a corky bark. The second is the Fraxis pennsylvanica known as the green ash. It has a smooth, grey bark.

Commonly seen in woodlands, they like moist rich soil. They are often found in old agricultural fields.

The leaves turn an attractive orange and red in the autumn.

May be light grey to deep brown. It has fissures and grooves which may look like a diamond shape in older trees.

The seeds ripen in September and fall off in early winter. They have small wings 1 to 2″ long, known as samaras.

Male and female flowers grow on different trees and appear in April and May.

This tree produces leaves which are a good source of food for the American bullfrog, as it does not have tannin in it.

This is a valuable timber source. Famous as a material in baseball bats, it is used to make handles, architectural trim and even lobster traps!